This past weekend I took my wife on a date in downtown Portland. We were walking through the busy streets, on our way to enjoy a nice dinner just a few blocks from where we parked our car. As we walked across one particular crosswalk, there was a man sitting on the corner playing drums on some empty 5-gallon plastic buckets. My wife turned to me and said, “I love street drummers!”.

I stopped in the middle of the intersection, almost paralyzed with shock.

We’ve been married for 10 years and I had absolutely no idea that she liked street-drummers. It wasn’t the fact that she liked the sound of drumming on buckets that surprised me as much as it was that even after all this time, there were still parts of her that I didn’t know.

Can I be honest for a second? I think after 10 years of marriage, I had convinced myself that I had learned everything there was to know about my bride.

You remember that story in the Scriptures, back in Exodus 16, where God miraculously provides bread from heaven for the Israelites? In case you’re not familiar, God was in the middle of massive rescue mission where he was saving the Israelites from slavery. In the middle of their journey, the people started to get upset with God about their lack of food. Instead of bailing on them and telling them to figure it out on their own, God takes care of his people and starts dropping fresh food from the sky.

Crazy right? It gets crazier.

God then tells his people that they aren’t allowed to hoard the food. He commands them to trust him, and if they did, he would show up every single day and give them a new batch of fresh food to survive.

Did you catch that?

The God of the entire universe said he would show up and provide for them daily! If I were the Israelites, I would probably be the guy hoarding some extra food in my tent. You know why? Because I’ve convinced myself that God is a pretty busy guy and doesn’t really have time to fit me into his hectic schedule.

God could have shown up one time and provided months’ worth of food and then went back on his way. But instead, he shows up every single day.

The God we serve isn’t interested in saving you once and then checking in on you from time-to-time. Jesus, the Good King, is pursuing you daily.

Later in the Scriptures, Paul tells his readers to pursue our wives the way God pursues us. Here’s what that means practically: you aren’t allowed to pursue the heart of your spouse once and then check in periodically from time-to-time. Loving your wife the way Christ loves the Church means pursuing her heart daily the way that God daily pursues yours.

This isn’t just for married folks, either. Who has God put in your life that you’ve stopped pursuing? Who have you convinced yourself that you know everything you need to know about them?

Don’t stop studying the ones you love. You never know, they just may love street drummers.

Order his newest book, Dad Tired and Loving It, here.

Did you miss our podcast interview with Jerrad? Take a listen here! 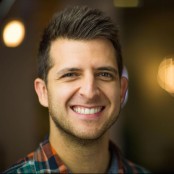 Jerrad is the pastor and founder of DadTired.com, a podcast and community of men who are learning to lead their family well. For the past 13 years, Jerrad has been helping people fall more in love with Jesus through street-level, Gospel-centered messages. He and his wife Leila live in Portland, Oregon with their three kids.

Share this ArticleLike this article? Email it to a friend!
Email sent!